Today’s vehicles are using ever-increasing numbers of CAN and LIN networks. The neoVI FIRE and neoVI RED address these issues by providing multiple channels of Dual Wire CAN, one channel of Single Wire CAN, one channel of Low Speed Fault Tolerant CAN and multiple channels of LIN in one tool. All channels run simultaneously on the neoVI FIRE and are time-stamped in hardware. A fully-isolated USB interface allows a PC to send and receive messages without worry of damage.

In addition to operating as a PC interface, the neoVI FIRE and neoVI RED also work in standalone mode, which allows them to run real-time scripts, log data to a removable microSD card, and simulate ECUs and gateways. With these features, it is also possible to run a script to reflash ECUs using data from the microSD card.

Our Vehicle Spy software fully supports the neoVI FIRE and neoVI RED. Users can use Vehicle Spy to monitor and transmit on all neoVI networks simultaneously. Vehicle Spy is used (and required) to configure standalone mode. Users can take advantage of the powerful interface to load databases, and to write and debug scripts before downloading them to the device. 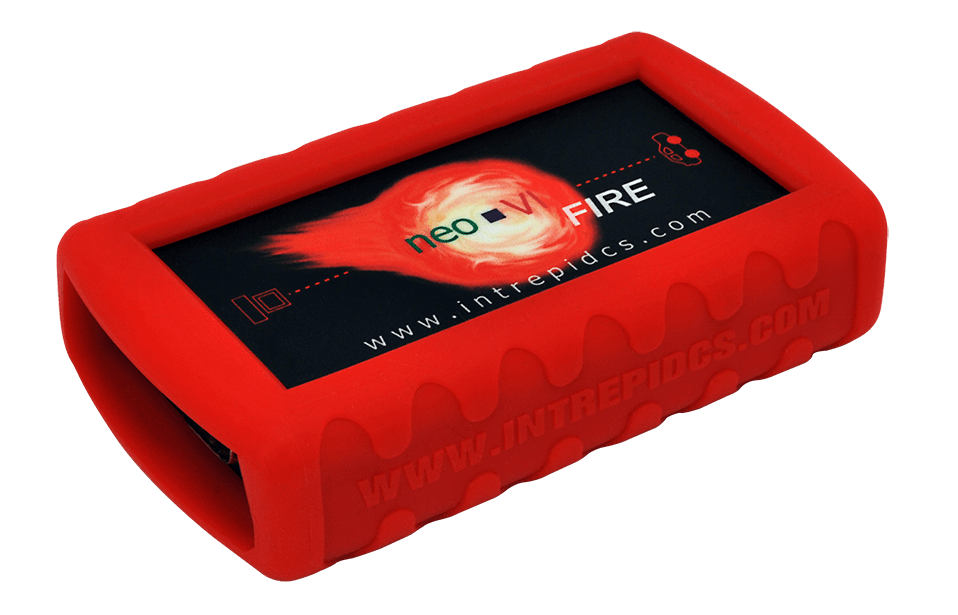 Some of our customers prefer to write their own software. To support these users, the neoVI FIRE and neoVI RED are compatible with three open APIs: neoVI DLL API, SAE J2534 API and the TMC RP1210 A/B API. The neoVI DLL API includes examples for all popular development environments, including C#, VB. NET, VB6, Delphi, C++ Builder, Visual C++, LabVIEW, and LabWindows.

The neoVI FIRE and neoVI RED include a real-time scripting engine that can be used to perform real-time messaging. For example, someone creating an application can load a script into the hardware and interface with the script variables, allowing microsecond-level measurement and control. Vehicle Spy also now has a new feature called hardware acceleration, which can be configured to send real-time functions to the device such as periodic messaging, replaying, or scripting.

The neoVI FIRE and neoVI RED are capable of logging to a removable microSD card, which uses a real-time fail-safe FAT32 storage format. Both devices also include a real-time clock for hardware timestamping of all messages. Finally, a powerful power management system automatically powers down the neoVI and can wake it up based on network activity or detection of a PC being connected.